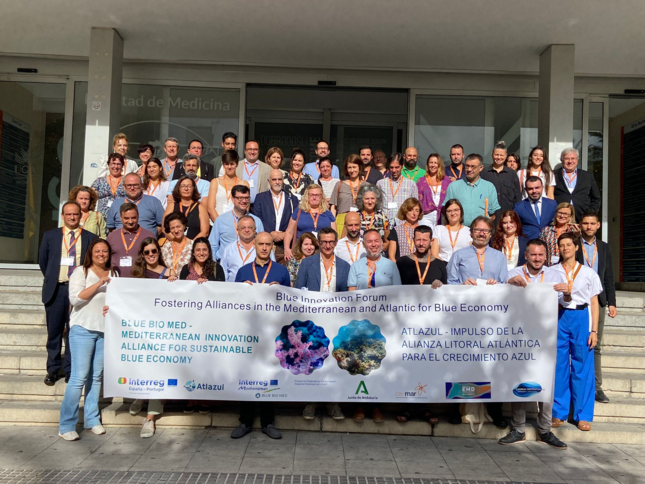 For its Final Conference, BLUE BIO MED organised a Blue Innovation Forum in Cádiz, Spain, on 14-15 September 2022. The event brought together over 100 Atlantic and Mediterranean stakeholders (both physically and remotely) and aimed at fostering alliances for the blue economy. It was organised as part of the “European Maritime Days in my country” initiative, led by the European Commission’s Directorate-General for Maritime Affairs and Fisheries (DG MARE).

After two years of rich and fruitful collaboration, the Interreg MED BLUE BIO MED project is coming to an end. The Blue Innovation Forum, organised in Cádiz together with the Atlazul project, was a way to showcase what the projects had achieved and set path for the future. In particular, the Forum contributed to build transnational bridges and reinforce cooperation between the Mediterranean Innovation Alliance for Sustainable Blue Bioeconomy (MedIA-SBB) and the Coastal Atlantic Alliance for blue growth, impulsed by Atlazul. Both Alliances are indeed supporting and promoting regional policies and innovation actioners involving quadruple helix stakeholders in their respective sea basins and beyond.

The first day aimed at sharing knowledge and best practices among Atlantic and Mediterranean actors.

In the opening session, institutional representatives from Mediterranean and Atlantic regions highlighted the importance of innovation in the development of blue sectors in their territory.

José Enrique Millo Rocher, Andalusia’s General Secretary for External Action also stressed the importance of blue economy in our territories. “The Blue Economy is fundamental for the development of the territories, represents 1.5% of the GDP of the European Union and generates 4.5 million direct jobs.”, he said.  He also announced that the Junta de Andalucía is working on the 1st Andalusian Blue Economy Strategy. He finally stressed that “All blue economy sectors must reduce their impact on the marine environment and biodiversity.”

José Apolinário, President of the Regional Coordination and Development Committee of Algarve, highlighted the cross-border collaboration with Andalusia thanks to the ATLAZUL project in areas such as food (aquaculture and seaweed production), cooperation between ports and nautical and coastal tourism.

Francisco Piniella, President of the International Campus of Excellence in Marine Sciences (CEI.MAR) and Rector of the University of Cadiz, stressed that "the sea continues to be the link that makes us strong and redoubles our possibilities for smart, sustainable and inclusive growth for the future" and warned that "the future is blue and green, it must be environmentally sustainable and built looking towards the sea."

Session one, which followed the opening, allowed to discuss the two alliances promoted during the event - i.e. the Mediterranean Innovation Alliance for Sustainable Blue Bioeconomy (MedIA-SBB) and the Coastal Atlantic alliance for blue growth - and to give some perspectives from key institutional Atlantic and Mediterranean actors.

These presentations were followed by interventions from the Interreg Euro-MED Programme’s Joint Secretariat, the European Commission’s Directorate General for Maritime Affairs and Fisheries (DG MARE), the Secretariat of the Union for the Mediterranean, and the Spanish Presidency of the Atlantic sea-basin strategy. Panellists shared perspectives on ongoing and upcoming actions and initiatives that can foster the development of both Alliances.

Session two explored capitalisation and collaboration potential between initiatives and experiences in the Mediterranean and the Atlantic area. Fabio Fava, member of the Group of Senior Officials BLUEMED Working Group, stressed the role of framing strategies like BlueMed or the EU Mission Restore our Oceans and Waters to steer and promote action on the ground. Concrete examples of ongoing activities were offered by the Interreg MED B-BLUE project, the Access2sea project, the WestMed AquaWest technical group (Accelerating Sustainable Aquaculture in the western Mediterranean), the Interreg Atlantic Area EnhanceMicroAlgae project, the Interreg Atlantic Area EMPORIA4KT project, and the Report on Circular Blue Economy developed by the Interreg MED Blue Growth Community and SwitchMed projects.

Day two sought to foster collaboration between both sea basins by analysing concrete examples of European alliances in other fields, as well as applications of smart specialisation strategies in blue sectors in Mediterranean and Atlantic territories.

The first session focused on the actions and topics the MedIA-SBB will pursue and the governance model it will implement in its pathway to maturity, and looked at other successful examples of alliances such as the SEA-EU Alliance, the WestMED initiative, and the SwitchMed initiative.

The last session gathered representatives from business and business-support organisations to discuss about the development of innovation and business models and opportunities in blue economy, such as the use of raw materials from the Mediterranean Sea for the cosmetics industry by APIVITA Greece. Cluster CCMA, IncubAzul, Sines Tecnopolo, BlueNetCat and Faros Italian blue economy accelerator brought their experiences and activities.

Although the BLUE BIO MED project is ending soon, at the end of September 2022, the adventure does not stop there. All the work and collaboration initiated will be extended through the Mediterranean Innovation Alliance which is being officially set up.

The process of onboarding its supporters and first member has started with the Innovation Blue Forum. The first 30 members registered and more can do so by signing – i.e. filling up the online form - the Charter of the MedIA-SBB, at the link below.